Recently I started getting an error message scrolling between “Check Rear Lights” and “Cruise Control not available”. It turns out after a little research that this is due to the Brake Switch. This switch is a real pig to change. There is very little room to remove and refit the part plus you have to lay upside down in the foot well to get any chance of reinstalling it. Following the various posts on the Jaguar forum it appears that this is a common issue. On removal of the switch, I found that one of the metal levers on one of the micro switches had snapped off, probably due to fatigue.

I found the missing piece in the foot well but as it had snapped off, there was nothing to do except replace the switch. A quick look around on the various suppliers plus that well known auction site I found them available but at a high price. Jaguar spare suppliers were around £115 plus delivery and second hand around £50. Well I thought to myself, the micro switches are just soldered in so if I could find a replacement then it would no doubt be much cheaper! The original  ones were manufactured by Cherry and had A2 42 printed on them.

That did not seem to help much, however reading the posts on the Jaguar Forum page a little closer and a very helpful member called Jima had posted a suitable replacement part. (Omron D2HW-A211D sub-miniature micro-switch). These are available from a number of places but I used RS components The micro switches were only 98 pence each so I purchased three of them just in case. The picture on tier website did not look correct as it had three cables connected but they were in fact perfect. The hinge is not the same design as the originals but they work fine. I did put a slight bend in the end of the hinge and also spent a little time fine tuning them once installed to get them both to click on/off at the same time.

The image below shows the slight bend I put into the hinge.

Getting the switch back in place was the real challenge. A tip on the Jaguar forum mentioned using some thread to help align the bracket. I did try using some fine wire wrapped around the two threaded pins and though the holes in the bulkhead. This on its own failed to get it lined up properly. In the end I had to remove the drivers seat and lie upside down in the foot well. Using a light shining into the engine bay I could see roughly where the holes were. Using the wire and the light I eventually managed to get it back in. I checked the positioning of the adjuster in the switch which you can see in the image of the “Rear of the Brake Switch” above.

A quick test drive and all was working fine. All in all a great result and best of all it only cost less than £5 to fix it. There was however one slight drawback. I did the work outside so I could have the door open and roof down to get better access. The local mosquitoes/midges took a liking to my midriff and I now have a large number of very itchy bites. The suffering we have to go through to keep our beloved Jaguars on the road!

As a long term Le Mans 24 hour visitor I gave it a miss this year and decided to take my wife to the Goodwood Festival of Speed. It was a great event which we both enjoyed. We attended both the Saturday and Sunday. There was beautiful weather and fabulous cars, what more could you possibly want. There were a a few highlights, Jaguar winning the hillclimb event in a XJR-12D in a nail biting finish. My second favourite was seeing a rather unusual looking 1911 Fiat. It was built around a really tall and narrow engine with just what looked liked vents coming out of the side for exhausts. Seeing flames pour out of the side as it made its way up the hill was a sight to behold. I also happened to be standing next to the Williams Renault of Nigel Mansell when they started it up and showed off the amazing active suspension system (see the video). 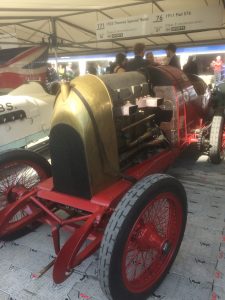 The weather was great, this was taken on the way to the hotel on the Saturday evening at around 6PM so still very pleasant temperature with the roof down in the XKR.

I would suggest you also go for the Grandstand seat option. We had done for the second day. You can go in any one of the public Grandstands assuming you can find a space. (There are a few company ones that you cant go in) We sat in one along the straight in front of the house for a while. you get to see some of the cars doing doughnuts there and generally hooning about. For the close of the day we went further up the hill at Molecombe Corner and watched them enter the bend trying desperately to scrub of some speed.