Well, I guess I can blame it on my Dad!

Many years ago, when I was just a teenager (around 19), I was driving a MK1 Ford Capri 3000L which I thought was great. My, now late, father had been driving a Marina Van for years but someone decided to do a hit and run on it so he needed something to drive to work whilst the insurance claim was sorted. Someone he knew offered him a metallic dark blue Jaguar Series 1 XJ6 that had been sitting unused for a while for the princely sum of £100. Well he bought it, replaced the split water pipe and drove it for a while. The company I worked for closed down and I was without work and so I sold my Capri and brought a motorbike. While I was looking for a new job, I got to drive the XJ6 and boy what a drive. It had poise, drove sweetly and just looked great. I even borrowed it to go and sign on which got a few disparaging looks! Well I was hooked and it was not too long before I got a job and started saving for a Jaguar of my own.

Eventually in 1987 I achieved my goal and purchased a Black Series 2 XJ6 4.2L Jaguar. I had spent a while looking at a few and those Series 1 and especially the series 2 Jaguars were really bad for rust. The one I found I thought was pretty good and had just the odd tiny little bubble in the wheel arch and around the headlights. Obviously, you can guess that just a year or two later, those little bubbles turned into huge holes!

I replace/repaired the wings, patched up the wheel arches and drove the car with pride. Around this time I joined the JEC and discovered that the car I should of bought was the Series 2 Coupe but I loved my car anyway. I purchased a house with my girlfriend, now long suffering wife, in 1988 just as the prices were going through the roof but I still managed to use the Jaguar as my daily driver as it was only about 3 miles each way to work. Then came the hammer blow, not only was the mortgage going up each month, which was tough enough but also the company I was working for decided to move location 30 miles away! There was no way I could afford the petrol, even way back then, so I had to use my girlfriends car. So there I was, going from a sleek effortless glide of a Jaguar XJ6 to, would you believe, a Lime Green Austin Allegro. Yes the weird shaped steering wheel Allegro. Something like below: 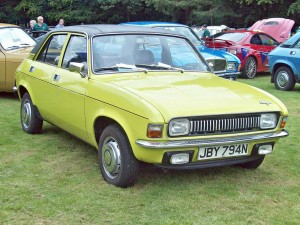 Now I am sure there were nice Allegros but ours was bad! I was about to discover how bad it was as I had not driven the Allegro before, why would I when I had a Jag? The gearbox whined in every gear and lots of the electrics did not work. For example the temperature gauge did not work. I started to sort out the few issues with it.

Meanwhile the Jag was in the garage at home and I started replacing some of the rusty panels. The occasional running of the engine and attempting to repair the odd panel carried on for a year or two. Then I  got married and soon became a Dad so then the Jaguar stood patiently awaiting my return. I could not bring myself to sell the Jag so I kept it in the garage and then under a tarpaulin for a while around a friend place till I eventually built a garage at my next house. It sat there in that garage for a few more years (around 15 actually!)

Meanwhile a few other Jaguars entered the family whilst the Series 2 waited patiently:

Then in around 2005 whilst sitting in a field at Le Mans surrounded by Jaguars, I decided it was time for me to have another Jaguar. The Mondeo Estate was just not good enough. Most of the time I was driving on my own so why not let my wife have the family car (the Mondeo) and I could have a 2 seater. Roll on the XJS! I got back from Le Mans and that August I purchased a lovely 1995 facelift 4L XJS

I kept this car for just under 10 years and did over 90,000 miles in it. A bit of the story of my ownership of the XJS can be found at this link XJS story

Following the sad departure of the XJS in 2013 after a fire caused by me repairing the floor and managing to set fire to the interior, I set my sights on owning a suitable replacement and after a lot of thought, rather than another XJS, I decided it should be an XKR. After a few weeks searching plus a painful and significant increase in budget, I became the proud owner of a 2004 XKR 4.2 Convertible.

So now in 2015, almost 2016 I am left with the XKR and the Series 2 that needs restoring. I should also add that my wife now has a Jaguar X-Type estate to complete the Jaguar ownership.